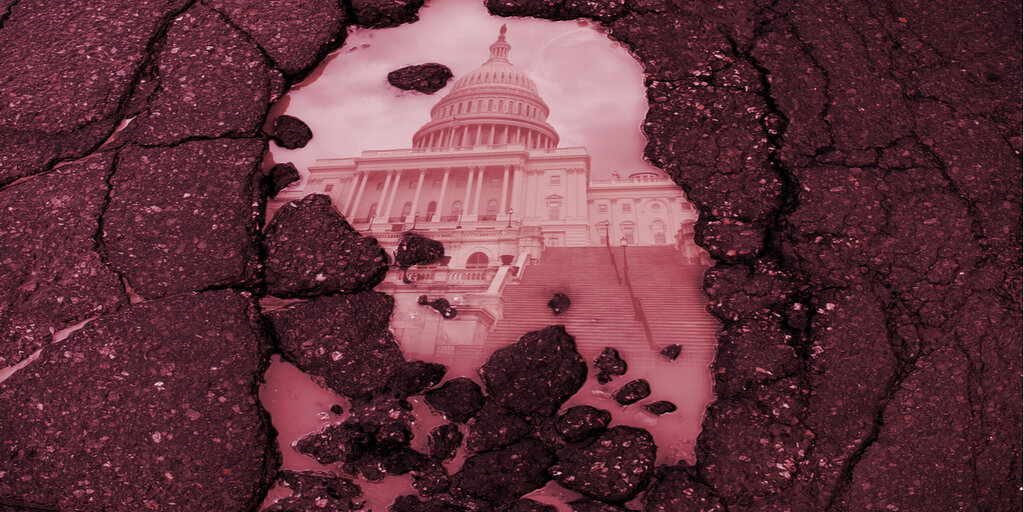 A bridge collapses in suburban Minnesota, bad pipes make drinking water unsafe in urban Michigan, and the internet goes dead in rural Kansas. The $550 billion answer to solving such issues is the in-progress bipartisan infrastructure bill being hashed out in the Senate.

But the price to pay may be steep for those in crypto, with some saying it could “kill” the industry as we know it.

To pay for $28 billion of the total, the bill includes a provision to expand the definition of a broker for tax purposes to cover “any person who (for consideration) is responsible for and regularly provides and services effectuating transfers of digital assets.”

In practice, this means that crypto miners, validators on proof-of-stake networks, and possibly even those active in decentralized finance markets (think liquidators or governance-token holders) will have to meet IRS reporting requirements and file 1099 forms. These forms include customer data such as name, address, and tax identification number (which, in the case of self-employed individuals, can be a social security number).

The ostensible reason for the provision is to ensure people pay taxes on their crypto earnings—legislators reckon that it can lead to $28 billion more in payments—but it ratchets up financial surveillance to ensure such a result.

This might sound to you like the return of the Trump-era Treasury Department’s proposed (and delayed) crypto wallet regulations, which would “require banks and money service businesses (‘MSBs’) to submit reports, keep records, and verify the identity of customers” for crypto transactions to private wallets. But it might actually be worse.

1/ 🚨 Here’s the deal with the US infrastructure bill:

A new provision has been added that expands the Tax Code’s definition of “broker” to capture nearly everyone in crypto, including non-custodial actors like miners, forcing them all to KYC users.

This is not a drill 👇

Jake Chervinsky, general counsel at DeFi lending protocol Compound, tweeted, “It’s literally impossible for non-custodial actors like miners to get the information they need to do Form 1099s. In practice, this could mean a de facto ban on mining in the USA.”

Marta Belcher, a cryptocurrency and civil liberties attorney, told Decrypt, “The bill could make it impossible to conduct cryptocurrency transactions directly with others, via open-source code (e.g. smart contracts and decentralized exchanges), while remaining anonymous.”

Chervinsky added: “It defies logic to adopt a regulation for which compliance is literally impossible, unless the goal is to kill the industry.”

Sources with knowledge of the bill negotiations tell Decrypt Chervinsky’s reading of the situation is correct. However, it’s not certain this provision will make it into the final bill, which is likely to pass. “While the language of the bill is rapidly evolving, as written, the definition is broad enough that it could potentially also capture miners and others in the crypto space,” said Belcher.

What’s frustrating for some is how opaque the process is.

Evan Greer, director of the digital rights group Fight for the Future, told Decrypt, “It seems like a sneaky backdoor method of enacting the recently delayed FATF guidance without real democratic process.” She was referring to the Financial Action Task Force’s draft guidance to virtual asset service providers, which would mandate that even non-custodial entities collect data about others’ crypto use and report it to the federal government.

She added: “Policy changes that impact civil liberties, privacy and the future of the internet should be debated out in the open, not attached to must-pass infrastructure legislation at the last minute.”

The infrastructure bill advanced on a 66-28 procedure vote today. Senators continue to revise the proposed legislation, which may be put up for a final vote next week before Congress goes into recess on August 9.